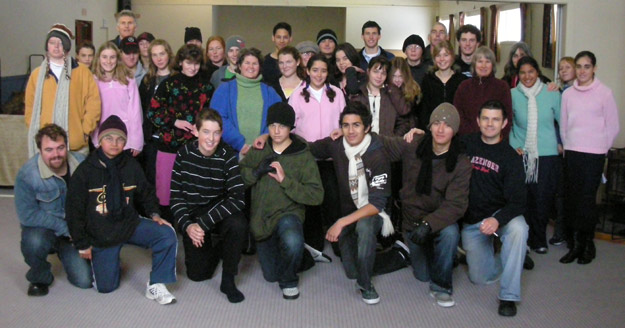 Will you let Jesus wash you Whiter than Snow?
About 42 people attended Youth Bible Camp '07 at Mt Hutt Retreat near Methven in Canterbury during early July. The theme emphasised the importance of salvation and how Jesus wants to make and keep us pure from sin!

The camp included some great learning and friendships. Even the weather fitted well when we got about 25-30cms of snow fall part way through camp. All the campers enjoyed their time! This is what some of them had to say: 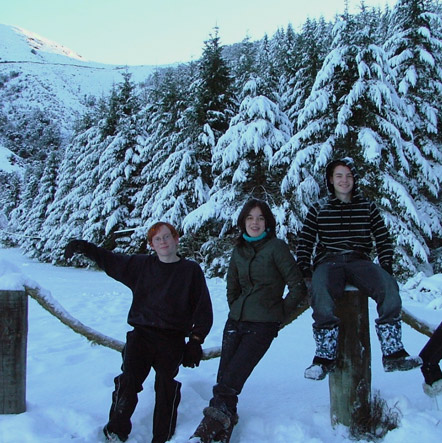 "This camp was awesome... I gained so much."

"I now know the Bible much better than when I came to camp... I want to give my heart to God so much & make me whiter than snow =)."

"Camp was a great experience. I'm so glad I came. Thank you guys..."

"The camp was the best thing that happened to me. This camp has bought me closer to God, and closer to my friends."

"Had a great time. The meetings really had my heart long to be more like Jesus. I love singing and so enjoyed singing at the rest home."

"Camp was a great encouragement to me! Just the recruiting place for the 'army of Youth'."

And that's what Youth Bible Camp is all about! — having an enjoyable time together while growing closer to Jesus and each other while studying God's Word, learning practical skills, developing friendships for eternity!

Each morning for worship some of the youth themselves took the devotion time. Cassandra prepared the first worship where we looked up texts about "believing" and studied them. The next morning Brendon shared a powerpoint presentation on Vegetarianism in the Bible. Stephanie shared an interesting worship on what we would change if Jesus was to live our life for a week.

Malcolm and Amy did Sabbath morning worship on the spiritual lessons we can draw from snow. And Sunday morningKorina and Dave had us memorising a passage from That I May Know Him. "The very fact that we are called upon to endure trials proves that the Lord Jesus sees in us something very precious that He would have developed. If there was nothing in us whereby we might glorify His name, He would not spend time refining us." And on the last morning Justin, Cassidy and Tori showed us the importance of memorising the Bible!

Nathan Mitchell was our main speaker. He went through various different steps of how God saves us and how He wants us to give ourselves totally to Him. He really had us turning our Bible pages and lots of us were much faster at finding passages at the end of camp than we were at the start. Nathan really emphasised the importance of knowing God and letting Him work in us. Many young people were touched by the messages and also the time Nathan spent with them between meetings.

On thursday evening we watched a video called Pamela's Prayer of the experience of a girl who's father really encouraged her to remain pure and it contrasted Pamela's friend who was quite the opposite. This video caused some interesting and valuable discussions in the bunk rooms over the next few evenings. During the video a couple noticed that it was snowing outside and afterwards every one ran

out to see snow falling every where! For many it was the first time they had seen snow let alone it falling!

On the last night Nathan took a short meeting and then Rewi andTori, two of the youth shared their testimonies. It was a really touching time as we heard of the events that our friends had been through but how it has made them want to live for Jesus. I think it stirred us to understand each other better and to see how God can change us to be more like him.

As usual, sabbath was a really enjoyable day during YBC. This year we had to leave early because there was still lots of snow on the ground as it had snowed a lot on friday. The vehicles and roads were covered in snow but we got safely down to the main road and travelled for about 30 minutes to Ashburton.

We arrived at the Ashburton church just in time for Sabbath school.Stephanie & Tori lead out in the preliminaries and lots of other youth read out Bible texts based on the Bible Classes we had during the camp. Sofia, Renee & Mindy had prepared some stories and song and shared them with the children for their class while Nathan took a lesson for everyone else.

At the main service time Apanui lead out and Brendon took the prayer and Nathan took the service. Logan and CJ were the decons. The church was totally full and the members only took up a few pews but we all had a good time.

The local church people thanked us very much for coming and said they would like us al there every week. After church we had a chat to the people there and the children loved playing in the snow we had bought with us on top of our vehicles.

After lunch we went to the Ashburton gardens and looked at the birds and plants there and then walked to Cameron Courts, which is an elderly folks home.We shared a selection of songs we had been practicing during the camp. We had an Instrumental item with violins and guitars performed by Doug, Imraan, Louisa and Jo. Also Arumiaand Brendon did solos and Leilani and Chantelle sang a duet. Afterwards many of us talked to the elderly folk who really enjoyed us being there.

Of course we also spent lots of time in the snow! As well as most free time we also spent all of Sunday morning in the snow, it was sunny so if you kept doing something it was plenty warm enough. There is a really great slope there and so we slid down it and built jumps and banks. When the snow first fell it was clear and pure, but after we had all run and played and rolled in it it was not as untouched and pristene - there was a lesson in that too!

We also played a variety of inside games and activities but one of the most interesting was hat making. We had lots of polar fleece and cotton and we all had to make a hat for ourselves and help each other. There were almost as many different designs as there were campers.

One of the main activities this year was the YBC07 Team Challenge. But before we did the team challenge we all had to do an Individual Challenge which was instructions we had to follow. Most of us totally failed but we still had fun doing it - it was lots of fun once you realised what you were ment to do!

For the main Team Challenge, we were in groups of about 4 and we had lot of small sheets of paper with different types of challenges. We had to work as a team and find each other's abilities to get these done. The activities included math, art, poetry, rebus puzzles, sudoku, helping others, finding hidden objects, cracking codes and making things.

One of the interesting team challenge activities was Bridge it. We had popsicle sticks and glue and we had to make a bridge to certian criteria that could be very strong. Some teams didn't plan themselves well enough to get their bridges made in time. For the one's that were made, we tested them by hanging a bucket from them and filling it with water till the bridge broke. Two only took 8kgs and some took about 12-13kg, one managed 23 kgs and one clever design held 38kg before it smashed to bits.

When we had completed three activity sheet in the team challenge we got a packet which we couldn't open, damage or loose. At the end of camp we opened all these packages and in each one was a puzzle piece of a person. when we put them all together it was a picture of Jesus surrounded with people. The lesson here was that we worked together as small teams to get people and then as a big team we bought them together with Jesus. If we had lost someone or not put some effort into winning them they would not have been with Jesus. Fortunately every one was there!

As well as healthy the food was tasty and popular. For some reason peanut butter was the most popular and the cooks had to get more supplies part way through camp. Angela was the chief chef and Heather, Jan and Doug helped her out lots but everyone had turns to help with meal prep and washup.

Each evening we had a different coloured meal. The first night was orange, other nights were green, brown, white, yellow and red.

Breakfast was hearty because we needed to keep warm and the lunches were filling too.

At church on sabbath we had lunch there. There wasn't much space to the ladies got it ready in the wee room at the back and we all went up one side of the church and in a side door, got our food and went out the other side and most of us stood around the road side while we ate.

Much of the time between meetings was spent in the snow but we also had opportunity to spend time together in small numbers to make good friends and just chat. There were a few walks up to the 'chapel' which is a lookout to Mt Hutt Skifield.

After evening worship each night we enjoyed a drink and short social time or games together before heading off to bed. Most campers were pretty tired after a busy day.

Even though it was cold, no body was particularly sick or had a bad flu. On Sabbath morning though, Korina went to make sure Skye was awake and she found her lying on the floor and she wasn't responding. We all prayed and called First Aid and they treated her and took her to the hospital. Fortunately she was ok and she joined us after church.

Throughout the camp, campers had the benefit of mixing with other Christian young people. They gained new friendships and learnt from each other's experiences. Prayerfully these friendships will go on into eternity and the lessons learnt will benefit their lives here and in the future!

Notes for Campers!
• The organisers would like to thank all the campers that attended for being such a great bunch to work with. We look forward to seeing you next year and pray that you will continue to strive to be Whiter than Snow and grow in Jesus daily.

• We received a note from a member of the Ashburton Church. "There was such a great spirit at the Ashburton church when your group took it, - thank you for blessing our little church."

• Remember to keep in touch with each other and encourage friends to grow in their Christian walk.

• No meetings were recorded this year.

• If you have any comments, questions or suggestions on the camp contact us.